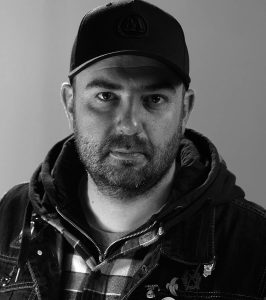 Born in Décize in the Nièvre in 1980. Lives and works in Clermont-Ferrand.

Far from the stereotypical image of the tortured artist, Motte radiates positive energy, insatiable curiosity and a fertile practice.

He has been drawing since childhood and discovered counter-cultures and alternative cultures as a teenager. He took his first steps in mural painting by vandal graffiti. During his studies in Lyon, the production of collective works and group graffiti, lead him to both illustrative and narrative achievements. He feeds his imagination with pulp and pop cultures, punk and hip-hop movements, comic books, American cinema and popular tales… references that he has not stopped integrating into his frescoes since.

His often mythical characters are staged in settings very different from their own history and he likes nothing more than to represent them in protest situations by skillfully combining humor, original compositions, slogans and a bright color palette.

He speaks of his art as a kind of sample where he tirelessly remixes different images as a musical composition. Eternally unsatisfied, he always goes further and never stops questioning himself to grow and evolve his practice.

Long time friend with the Clermont-Ferrand artist Keymi, they realize works with four hands and create together a painting with colored dynamics which answers each other and where their characters and decorations are mixed.