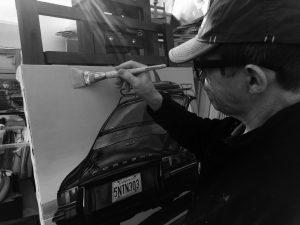 Born in 1952 in France. Lives and works in Dublin, Ireland

Fabriano graduated in 1974 from the Beaux-Arts of Clermont Ferrand and exhibited regularly in France and the United States from the beginning of the 1980s. Quickly recognized and collected, he created sets for television, notably for Le Grand Echiquier. Exhibitions in Chicago in 1989, then in 1990 in Miami, gave him the desire to travel around the United States and to discover cities that had made him dream since his adolescence such as New York, Los Angeles, San Francisco, Palm Springs, and the Californian desert. From these trips, his passion for mythical cars, embodying a certain idea of freedom and the American dream, was born.