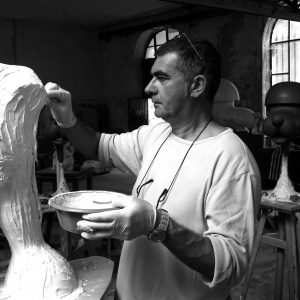 Born in 1957 in Toulon. He lives and works in South of France.

Michel Soubeyrand explores our subconscious with a deliciously ironic, corrosive, and aesthetic humour from a central theme – animality, our animality. He plays with our egos, transforming us into extravagant characters from tales, legends or unbridled mythologies reworked as by a writer of three-dimensional comic books. Michel Soubeyrand handles humour and excess with an unrivalled sense of realization.

If the spirit is essentially pop, Soubeyrand is a far cry from the pop imitators, neo-pop and pseudo kitsch who plunder Jeff Koons, Wim Delvoye, Jan Fabre or Ron Mueck. He nonetheless shares with Mueck a feeling for drawing and volume, a fastidiousness, and an exceptional technical mastery. Both started in film and publicity, and puppets – Mueck with the Muppet Show, Soubeyrand with the Bébête Show.

Thus, as a talented and masterful sculptor, he is able to give form and shape to ideas. Embedded in his Mediterranean universe, he creates a joyful interbreeding of Latin and Anglo-Saxon culture. The man becomes ‘Killer Dog’, a cross between a dog and a Smurf armed with a water pistol. His next metamorphosis is ‘Dog Vador’ armed with a laser-bone, or a green ‘Dog Buzz’. As for prince charming, he desperately awaits his princess in the form of a spread-eagles frog. The woman takes on the generous forms of a silicon implanted Smurfette. She becomes the she-wolf overwhelming the bull or the horse, their strange union giving birth to moods and feelings. She becomes a bitch, allowing herself to be tied up, seemingly submissive. Michel Soubeyrand’s women are always victorious, joyous, carnal, and sensual. His characters overflow with pleasure without taboos and without vulgarity.

Michel Soubeyrand is a truly popular artist, with a real personality and a powerful oeuvre, which combine to convince us all, men and women, bashful or not, of the necessary liberation of fantasies.