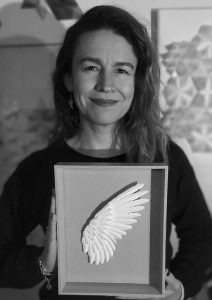 Born in Mexico City in 1975. Lives and works in Paysac (FR). Graduated in graphic design, advertising and marketing, she has been entirely dedicated to creation since 2014 and exhibits her work since 2012.

Nolvenn Le Goff enters the art world in 2010. It was at the International Contemporary Art Competition in Barcelona that his astonishing work was honoured for the first time. It reflects both his concern for environmental issues but also a philosophy of life and values such as empathy, solidarity and responsibility, a quest for harmony within us, between us and with the world around us.

Between art and design, she has created three series entitled Paper Cities, Harmonious Sets and Wings, which have the singularity of using paper as a raw material. Wishing to restore the dignity of this noble material, which has gradually depreciated over the centuries, she takes her creations to their limits through patience, precision and meticulousness.

In 2014, she founded Talent Lab, a small gallery and studio in Barcelona, a meeting point between artists and the public and a source of inspiration. This is how she was introduced to the world of sacred geometry, which led to the birth of Harmonious Sets. This purely geometric series will make him realize that we share a common origin and that our actions affect not only ourselves but the whole.

Her thoughts and her personal development will lead her to her last work, probably the most intimate: The Wing. Those of angels, birds, Pegasus who represent for Nolvenn his desire for purity, harmony, balance and resistance to the consumer society, selfishness and individualism. Heir to the mysticism of Mexican culture on the one hand and Celtic culture on the other, the artist impregnates each of his pieces with a halo of magic, fantasy and sincerity. With this series of maturity, she takes off to conquer new dreams.

She has been exhibited in Spain, France, Mexico … and at the Galerie Artima since 2019.